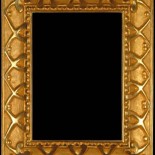 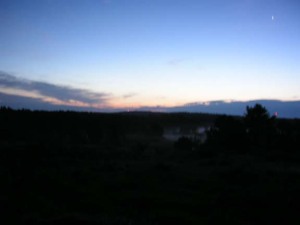 September marks the noticible turning point in the year when the sunrise comes later in the morning.  When called to be in the workshop early to meet a deadline I am often up before dawn to get an early start.  In the summer months the sun rises as I do.  This time of year I have to watch for the sun from my perch in the workshop,  looking up from my project to glance out the window watching for the sun to rise.  This image is one such morning I watched approach as I worked to complete a project of 27 hand made picture frames for an exhibit at Greenhut Galleries in Portland for artist Tina Ingraham .

We built two sets of frames for two sets of paintings in Tina’s exhibit titled “Observations.”  One set was a series of figure paintings we framed in a natural maple canvas floater frame.  The other set of frames were built for her series of still life paintings which are bound to her figure paintings in her Observation that the colors and shapes which create each study are really the  same as for the figure paintings;  it’s by her arrangement of brushstrokes and colors that they are identifiable as either a bunch of young garlic bulbs on a table or a bikini clad model reclining on a beach.
This body of work (the still lifes) we  framed in a canvas floater frame using burnished 22 karat gold leaf on the face of the frame and painting the sides a color we worked on with the artist to harmonize with the mid-tones in the painting.  One individual painting, a still life of a pear, was framed in a very special frame we created and which we refer to as the Persian frame.  It’s carved panel is based on an incised pattern we saw on an antique Persian censer.  I was excited about building this frame for her pear painting because she wanted to turn the painting into a gem by placing it into this special frame—and she remembered Robert Kulicke and his miniature still lifes of fruit which he would then surround in hand made tabernacle frames to transform the humble fruit into something to be worshipped.
Here are photos of the process: 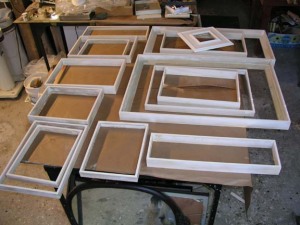 the floater frames assembled, gessoed, sanded, and ready for the bole 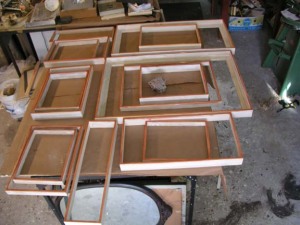 The floater frames with the Red Bole applied and ready to gild! 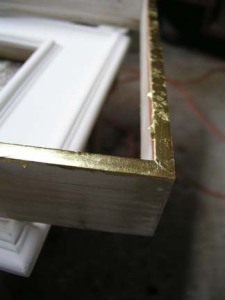 A corner shot as the frames are being watergilt

the floater frames assembled, gessoed, sanded, and ready for the bole

The floater frames with the Red Bole applied and ready to gild!

A corner shot as the frames are being watergilt

Detail of a frame as we burnish the gold–still matte on the left, burnished on the right

One of the finished paintings in its canvas floater frame

another image showing some finished frames in the artist’s studio

The Pear frame partially gilded showing the red bole on the right, the gold leaf applied at the upper left

The finished project in all its glory! An exciting and challenging project with a beautiful ending!